Photo by Andrew Small on Unsplash

Despite the advanced tooling we have at our disposal, it is often helpful to understand the mathematics fundamentals behind the algorithms we use. These fundamentals become especially important when interpreting and evaluating our results.

There's a lot of math short hands and symbols that makes it easier to express and quantify ideas. Let's go over a few that you might encounter in Data Science literature.

The summation symbol is the capital Greek letter Sigma used for summing values in a series. The i represents the index and m, n represents the lower and upper bound respectively.

Consider a competition between 10 people where one person will be selected as first place, another as second place and another as third place. In this case, \(n=10\) is the number of contestants. We are interested in the different combinations of first, second and third place, thus \(r=3\). The number of permutations is calculated as:

We can read the left hand side as n choose r.

The logarithm function (commonly abbreviated as log) is the inverse function to exponentiation. The logarithm of positive real number \(x\) with base \(b\) is the exponent that \(b\) needs to be raised to yield \(x\). This value is expressed as \(\log_b x\).

There are some very useful logarithm laws (also called logarithm identities) to help illustrate this relationship.

\(e\) can actually be calculated as the sum of an infinite series:

The Wikipedia definition states that statistics is the discipline that concerns the collection, organization, analysis, interpretation and presentation of data. That actually sounds a lot like what a Data Scientist does! As such, it should come to no surprise that several fundamental Data Science principles, methodologies and even Machine Learning algorithms are heavily rooted in Statistics.

Probability distributions are functions which map events to their occurrence probabilities. In statistics, events are any possible outcome. We call the set of all possible events/outcomes the sample space.

A random variable is a variable whose values are outcomes of a random phenomenon.

We usually use capital letters such as \(X\) to denote random variables. If we let lowercase \(x\) be an event, then \(P(x)\) is the probability of \(x\) occurring. We denote the sample space of all possible events as \(S\).

There are two types of probability distributions:

Expectation: This is the average value we expect to get if the experiment was repeated many times. If we get 1 dollar for flipping a head in a fair coin and nothing for flipping a tails, then our expected earning is 0.5 dollars from a single coin flip. We represent the expected value of random variable \(X\) as \(E(X)\).

Some probability distributions are so common that they have earned names for themselves. This list introduces only a few of them.

The particular parameter of interest in the Poisson distribution is the rate of events occurring (usually represented by \(\lambda\), pronounced lambda). Typically, this represents the average rate of event occurrence within a set time interval. 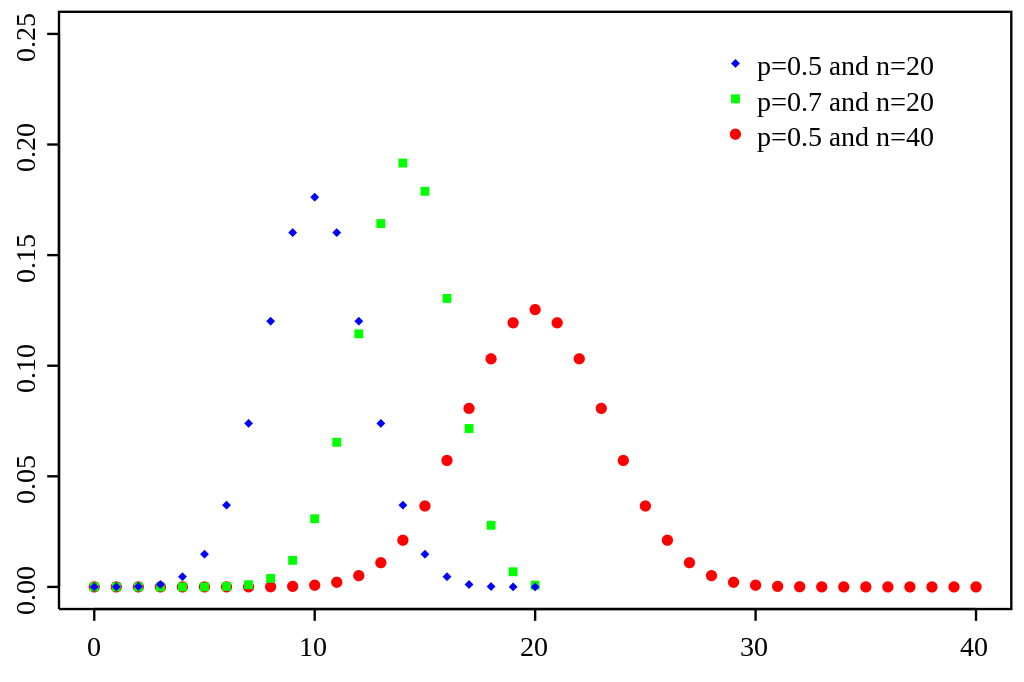 The Binomial Distribution is used to model the number of "successes" in a set of independent trials. A success could be rolling a 6 on a fair sided dice or being a carrier of a genetic condition.

Some assumptions made by the Binomial Distribution:

The Normal Distribution, also known as the Gaussian distribution, is arguably one of the most important distributions and concepts in Statistics. We typically denote the mean (which also happens to be the mode and median) as \(\mu\) and the variance as \(\sigma^2\).

Thanks to the Central Limit Theorem, we can use the Normal distribution to approxiamate most unknown probability distributions with a large enough sample size.

Central Limit Theorem: If we draw \(n\) independent and identically distributed random variables where \(\mu\) is the true average and \(S_n\) is the sample average, then as \(n\) approaches infinity, \(\sqrt{n} (S_n - \mu)\) will converge to a Normal Distribution with mean of 0 and unknown variance, \(N(0, \sigma^2)\).

We can simplify the Central Limit Theorem to illustrate that the true sample mean \(\mu = \frac{X_1 + ... + X_n}{n}\) converges to \(N(S_n, \sigma^2/ n)\). This allows us to use properties of the Normal Distribution (for one, we can calculate the PDF and CDF) for tests of statistical signifiance (how extreme are the values we observed?) when we don't know the true distribution.

Thanks for reading our Mathematics lesson

Here are some additional reading(s) that may be helpful: